This article was originally published on The Foreign Policy Website on November 22nd 2018. I'm posting it here for prosperity purposes (and just in case you haven't seen it before). Original Article can be found here.

Tartu by the Wondering Englishman

Published on November 22, 2018 in Entertainment by Ricardo Minesotor

The Wondering Englishman, whose real name is Alexander van Terheyden is a traveller who recently posted on his YouTube Channel “A Weekend in Tartu – Estonia!” The Englishman started his weekend break flying into the capital of Estonia Tallinn from London England, before driving with a friend Southeast to Tartu. Over the course of the 30-minute video, the Young Englishman really blitzed the city, taking in the Natural History Museum, Art Galleries, and Tartu’s famous Science Museum. Despite the obvious bad weather it was clear he warmed to the city the more he explored the place.

The video seemed to have been very well received when I stumbled across the video. 99% of viewers have liked the video, a rare thing on Youtube these days. People are hard to please in 2018! Maybe it’s the way Alex van Terheyden brings the viewer on his inquisitive exploration of the isolated Estonian city.

Tartu may be dominated by students, but it doesn’t roll off everyone’s tongue when it comes to places to visit – it would seem Vloggers like Alex van Terheyden may change that – bringing a beautiful historical city drenched in history to the attention of the Social Media generation. 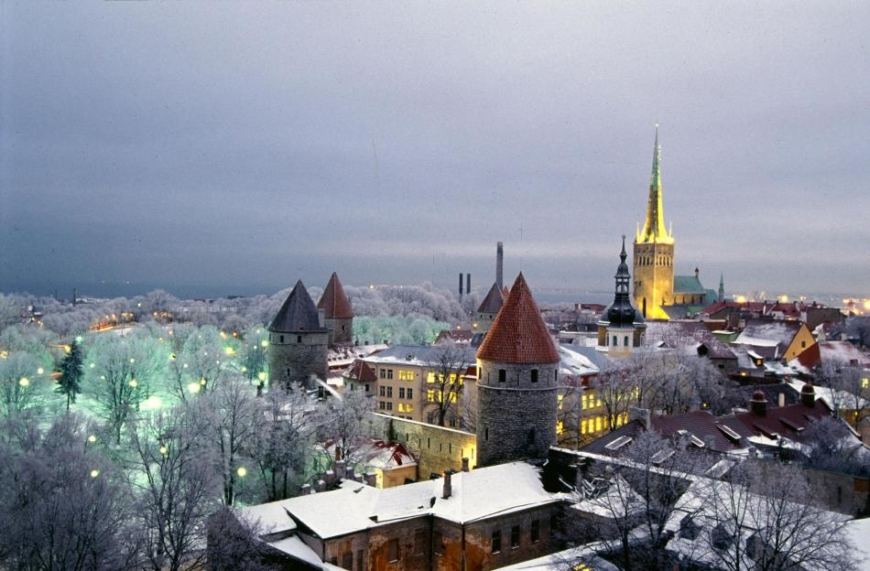 Tartu in the Winter

Alex got to Estonia via Ryanair an airline not loved by many but thankfully opening up the more isolated destinations to the wider world. The Wondering Englishman clearly wondered what Estonia would be like so he took himself there to explore (at least according to his YouTube Channel) the capital Tallinn, the coastal resort Parnu and my favorite Estonian city – Tremendous Tartu. Once in Tallinn, he drove, but upon returning to Tallinn, he got the train back. The connections between Tallinn and Tartu and frequent and reliable making the city more accessible than people may think.

I reached out to Alex van Terheyden and asked him what he liked most about Estonia and the city of Tartu. “The Estonian people are some of the nicest most amazing people I’ve ever met – I have a special place in my heart for them thanks to their hospitality and warmth. Tartu really surprised me, it was a city I really knew very little about before I got there, but its beauty captivated me from the minute I arrived. If you can ignore the odd modern building on the outskirts!” I asked him if he would be returning to Estonia – he responded “Without a doubt – I would very much like to see the rest of the country – hopefully in the summer! And I need to try more of your Beer as everyone I sampled was delicious!”

Whether its a weekend break to Estonia or taking the wider country in for a longer period of time I think it’s clear Estonia and Tartu have something to offer those who may have previously overlooked the Baltic Gem.

Below is the video The Wondering Englishman made about Tartu.

Life is better when you have a Sauna

Jyväskylä - The gateway to the Lakelands of Finland

Winter escapism on a loud snowmobile in central Finland

Life is better when you have a Sauna

Jyväskylä - The gateway to the Lakelands of Finland

Winter escapism on a loud snowmobile in central Finland

Let the dogs do the work :)

The Best Corner Guards for Baby in 2022

Zhytomyr, Ukraine - a city frequently ignored but maybe that will change

Jihadi Terrorist blows himself up outside Liverpool Hospital on Remembrance Sunday

A weekend in Chernihiv, Ukraine

The coming winter of Grievance

Kyiv Beach Clubs - We don't need the Sea where we are going!

Kremenchuk - a central Ukrainian city that may surprise you

Ukraine is more than just Kyiv, Lviv & Odesa - been to Kropyvnytskyi?

How to Travel inside Ukraine - Transport Guide

Will you get the vaccine?

The London Mayor Candidates and who to vote for

Kyiv - Ukraine - where to stay?

This was once the capital of England - you really should visit!

Gdansk a perfect weekend getaway destination for everyone!